Gertrude Käsebier started pursuing photography in middle age and was soon praised by Stieglitz as “beyond dispute the leading portrait photographer in this country.”[1] In 1897 she opened a portrait studio catering to the upper crust of New York society, commanding high prices for her work thanks to her “artistic” approach. Instead of formulaic poses, Käsebier sought to “make likenesses that are biographies,” as she put it, by spending hours with her subjects.[2] She was also known for her heartfelt, often allegorical images of mothers and children, which had an air of unposed authenticity even when staged for the camera. Käsebier experimented continually with photographic papers and processes and took full advantage of the painterly effects of gum bichromate.

Despite the fact that her thriving portraiture business put her at odds with the proudly “amateur” status of Pictorialist photographers, Käsebier was a core member of the Photo-Secession, and Stieglitz chose her over Edward Steichen to be featured in the first issue of Camera Work (January 1903). But after a period of increasing tension starting in 1908, due in part to Stieglitz’s disdain for commercially successful photographers and his shift toward straight photography, Käsebier definitively broke with Stieglitz in 1912, resigning her membership from the Photo-Secession in a tersely worded letter. Her friendships with other Pictorialist photographers remained strong, however, and she would go on to teach at Clarence White’s school and serve as honorary vice-president of the Pictorial Photographers of America, an organization founded by White and Alvin Langdon Coburn. 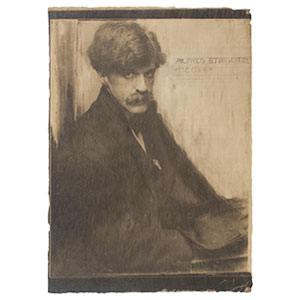