A collector and supporter of the arts, the Boston socialite Sarah Choate Sears was also an artist herself, having trained as a painter. Her friend F. Holland Day encouraged her to pursue photography, and she began exhibiting her work in Boston venues in the late 1890s; in 1900 Day included five of her prints in the show he organized in London, The New School of American Photography. Sears was a member of both the Linked Ring and the Photo-Secession. She seems to have largely abandoned photography after her husband died in 1905, although she did later return to painting.

Sears’s photographs, which were favorably received by critics and members of the Photo-Secession, include floral still-lifes, studies of children, and portraits of some of the most prominent artists and collectors in Boston. Stieglitz reproduced two of her photographs in the April 1907 issue of Camera Work, including the portrait of Julia Ward Howe, the author of “The Battle Hymn of the Republic,” which is part of the Stieglitz Collection at the Art Institute of Chicago. 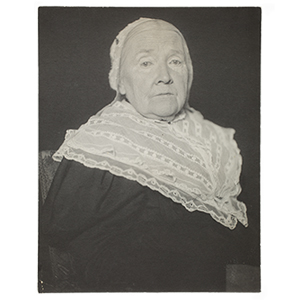