Best known for painstakingly planned and printed images of cathedral interiors, Frederick H. Evans was a friend of F. Holland Day and a member of the Linked Ring, an English society of art photographers. He also served as a bridge between British Pictorialist photographers and the Photo-Secession.

Evans practiced what he called “the straightest of the straight photography,” aiming to expose negatives so perfectly that no darkroom manipulation would be needed.[1] Unusually for a Pictorialist, he disdained the presence of visible brushstrokes in his prints, writing, “Photography is photography; and in its purity and innocence is far too uniquely valuable and beautiful to be spoilt by making it imitate something else.”[2] He preferred to print on rough platinum paper, which offered a rich tonal range while obscuring any slight defects in the negative.

In 1905 Evans was hired by the London-based magazine Country Life to photograph country churches, an assignment he would parlay into a longstanding, open-ended commission to provide the publication with images of architectural subjects. Evans also frequently wrote on photography, and his articles appeared in Camera Work and various British photography journals.

Stieglitz admired Evans’s cathedral images and devoted the fourth issue of Camera Work (October 1903) to them, writing that “of the thousands who have photographed cathedrals, none has imbued his pictures with such poetic qualities coupled with such masterful treatment.”[3] In 1906 Stieglitz showed Evans’s work alongside that of David Octavius Hill and Robert Adamson and J. Craig Annan in an exhibition of British photographers at his gallery 291. 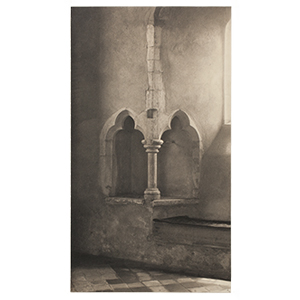 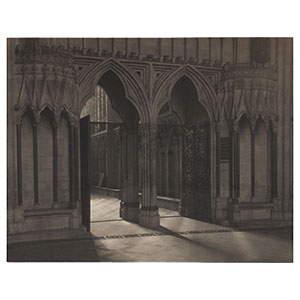